Notion Statistics in 2023: growth and more 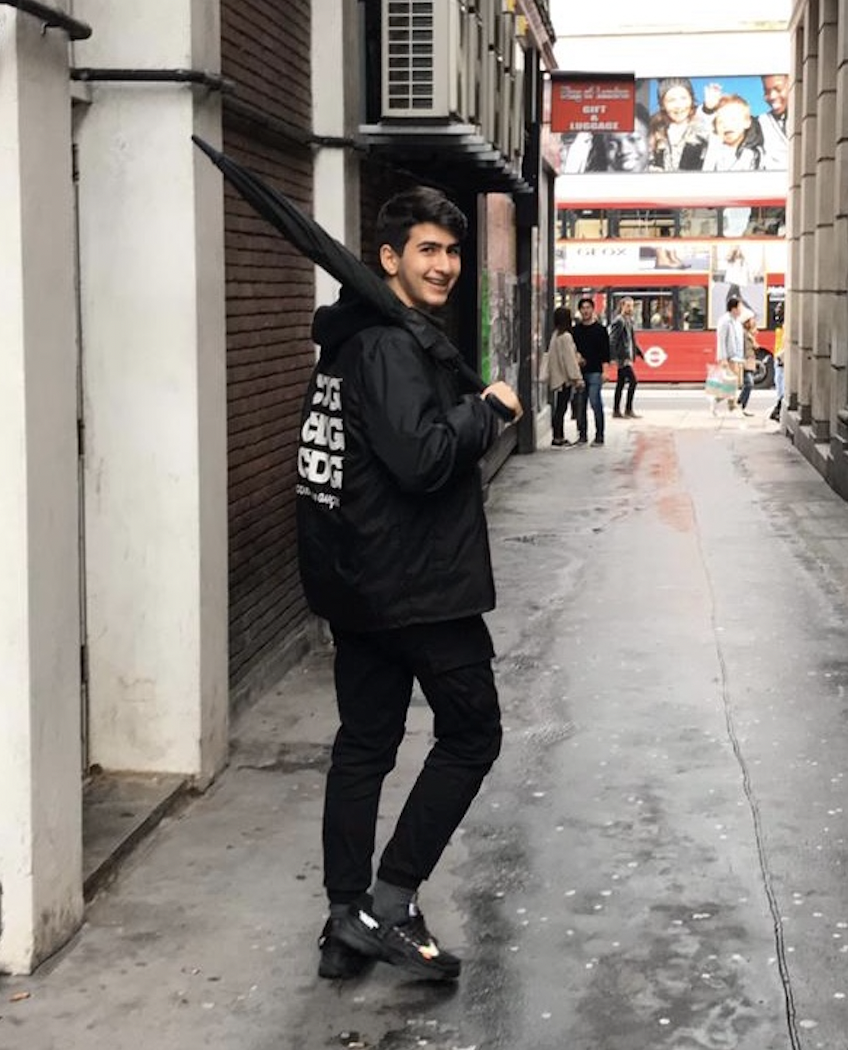 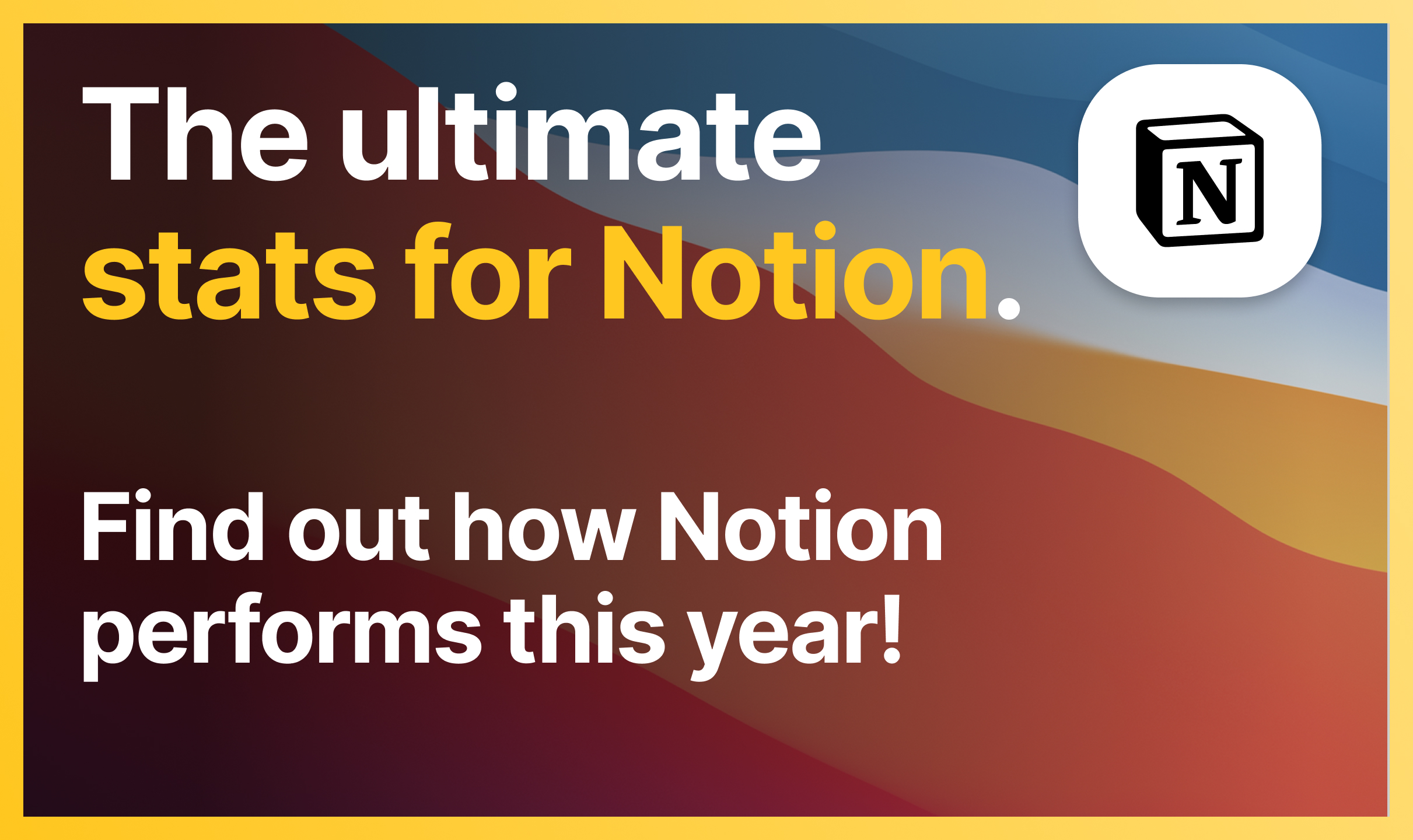 Launched in 2016, Notion is one of the most loved note-taking apps online.

Notion managed to climb its way to the top of every list ranking the best no-code apps and note-taking apps thanks to its huge advantages over its competitors.

The app quickly turned into a life-style for more than just meeting notes. Now you see people using Notion for studying, organising, website building, and more.

There's just so much that you can achieve with the power of this minimalistic, free, and no-code app that began as an online diary where you used to take notes.

In this post, you'll find the most useful information that you want to know about Notion in 2023.

We'll now go through Notion's numbers, including: users, revenue, employees, competitors and so on.

Without any further ado, let's see what Notion achieved and how they've shocked the world.

Let's first have a look at what Notion does best. To do so, we've prepared this compressed list with only the most important information about Notion:

When was Notion made?

The Notion app was released in 2016, entitled "Notion 1.0". The app's seen a lot of updates that improved the experience for the user ever since 2016.

As for the company itself, 'Notion Labs Inc' was founded in 2013 by Ivan Zhao, the all-time CEO of Notion.

Through time, the Notion app was updated and people started loving it even more.

This image below shows you the organic traffic that Notion received in the last two years, managing to achieve 2.6 million users per month.

Notion began to appear on different devices and in different formats, such as Android and iOS apps or simply in the desktop app version.

One important thing about Notion is that the app is available in multiple languages: English (US), French, Korean, and Japanese. Therefore, Notion has quite a large audience.

For now, English is the main preferred language of Notion's users.

How many employees does Notion have?

Notion has almost 400 employees in 2023, as stated on their Linkedin page. The company began only with 12 people working on the app.

As you can see, Notion isn't really the type of company that has a lot of employees. That's how SaaS (Software as a Service) companies work generally.

How did you find out about Notion?

We'd like to hear more about the way that you found Notion (and Simple.ink, if possible).

To do so, we've created this form where you can tell us how you found Notion.

Want to build a form like this yourself? We've got you covered our form builder, which is 100% free as well. Join Simple Notion Forms today!

How many people are on Notion?

At the moment, Notion has over 30 million users, out of which 4 million are subscribed (paid) users.

Notion's growth isn't over yet. As we type these words, it's most likely that Notion's numbers go higher and higher.

Why? Because Notion is still a tool that's still growing, and it doesn't really plan on stopping yet.

The r/Notion Subreddit has over 190k subscribers at the moment, leaving their competitor's subreddit way behind, Evernote (having only 16k users right now).

In this subreddit with almost 200k members, you can find lots of tips from people like you - awesome Notioneers!

How many people pay for Notion

The currently-estimated number of people that pay for Notion is: 4 million users. There could be more or less users, but that's what most people believe at the moment.

While Notion doesn't tell people how many users they have, here's what we know from the CEO:

This being said, we sure know that Notion keeps growing over and over again 🚀.

Want to find out more about the way Notion's plans work? We actually have a post where we explain everything about Notion's pricing and how the free/paid plans work.

Notion doesn't share their downloads, but you can look up Notion on Google Play, and you can see how the app has over 5 million downloads.

As a matter of fact, Notion's web app (the Notion.so website) is more popular than the installable app into your desktop or mobile device.

So then, the number of Google Play/iOS/desktop downloads represent the "more loyal" base of Notion users that would rather have the Notion app everywhere they go.

Speaking of Google Play, we know the following about Notion and Evernote:

Though, don't let this make you think that Notion is a bad tool. Evernote's numbers are so high because the app is older - it was launched in 2008.

As for Notion, we'll most probably see a huge growth in terms of downloads for the app in the upcoming years. Only time will tell!

Notion sees their profit increasing with each new year. As of 2021, Notion makes at least $30 million/year.

Notion is a Software as a Service (SaaS). This means that they build a product, and their revenues comes from people that pay for their product either by month or by year.

Basically, Notion is an already-made product that requires little improvement.

They make money off of your monthly/annual subscription and it is a a sort of passive income as long as people don't unsubscribe.

Notion is estimated to make around $70 million/year, having a total funding of $350 million.

In April 2020, Notion gained a funding round worth $50 million, with a valuation of $2 billion.

Notion managed to raise $275 million, founded by Coatue Management and Sequoia. Back then, Base10 Partners contributed to this funding as well.

The company rejected any VC (venture capital) at first. When launching the app and seeing the success of the tool, Notion became a venture capital company.

This table was sourced from GetLaka. For more SaaS stats, have a look at companies on their website.

The amount of time spent in Notion

Here's a list of average screen time in Notion according to different types of users:

To track your time spent in Notion, make sure to set up Apple Screen Time or to get any app like Apple's Screen Time.

Regardless of the tool that you use to measure screen time, the only purpose is to track your time spent in Notion so you could see where you locate yourself on the list.

How many influencers Notion has

Surprisingly or not, Notion has only around 90 influencers, and they go under the name of 'Notion ambassadors', rather than 'Notion influencers'.

Here is a list of 10 popular Notion ambassadors (influencers):

If you want to be added to this list, let us know and we're happy to add you here as well!

Simply click the live chat bubble in the bottom-right corner of the page and get in touch with our team, and we'll sort things our for you.

Why people used Notion in 2023

Notion has a lot of purposes, and that's why the app is loved so much.

There you go! These are the 10 most popular purposes for Notion in 2023. How do you use Notion?

Apps that work best with Notion

We'll let you decide that. There are many apps that you can connect and integrate in Notion.

The accessability and the amount of tuning that you can do to Notion is impressive!

Most popular Notion integrations in 2023

If you want to see the full list of tools that we can help you integrate in Notion and into Notion websites (including the ones above), make sure to check our Notion integrations.

Most popular Notion apps in 2023

At Simple.ink, we've actually built an App Store for Notion, where you can browse all of the apps that you can connect your Notion workspaces with.

Most popular widgets for Notion in 2023

For more widgets made specifically to be embedded in Notion, make sure to browse our Widget Store for Notion. Over 90% of the widgets are free!

Top 10 note-taking apps of all time

On a list with only the best-arted note-taking apps, Notion is definitely in the top 3 tools.

Ever since the early days, Notion saw a lot of growth. For the most part, their numbers didn't back down, so that means that people really got into Notion.

There are quite a few competitors for Notion, but out of all, Notion still manages to be in the top 3 most loved apps thanks to its simplicity.

Since this is a blog post where we speak about Notion's statistics, we're not going to go to into detail about any of those apps.

This was the list with Notion's stats for 2023. We tried to cover as many details as possible.

As Notion keeps growing, we'll be back to update this list as soon as possible, as much as we'll be back in the upcoming years with stats for Notion.

The best way to reach out to us is via live chat, by clicking the blue bubble in the bottom-right corner of any page on our website.

For more Notion content, make sure to check our Notion tutorials, where we teach people how to get the most out of Notion.

Thanks for stopping by!

Ch David is the co-founder and Simple.ink, and is in charge of the library of Notion tutorials, where lots of of free guides on how to use Notion and Simple.ink are published all the time. Learn how to use Simple.ink and how to get the most out of your Notion-built tools with David and the team.