iOS: How to add Notion widgets 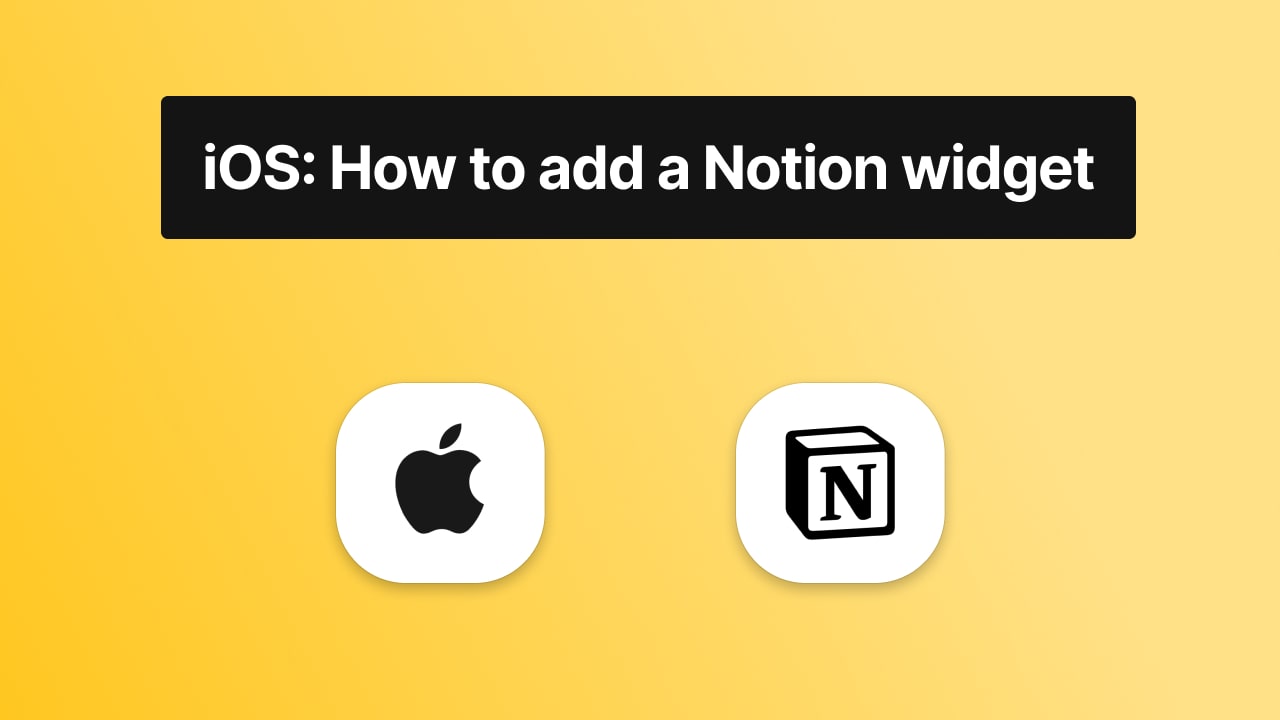 Needless to say, Notion is a lot of people's favourite no-code tool for the web browser and the desktop app.

Though, there are lots of Notioneers that also love to use the app on their mobile phones. Today, we're here for you!

If you've ever wondered how to add a Notion widget to your iPhone or iPad, we're more than happy to help you with that. In this guide, we'll address your concern!

How do I get a Notion widget on my iPhone?

Shortly, to add a Notion widget on your iPhone, do the following 5 steps:

We're now going to explain this in-depth, with helpful images to make it easier for you to add your Notion widget on the home screen of your iPhone or iPad. Bear with us!

How to add a Notion iOS widget

Keep in mind that we've started the guide with the app already installed into the device. If you don't it yet, get the Notion iOS mobile app. It's 100% free!

With this being said, let's get to the actual tutorial on how to add Notion widgets on your iPhone's home screen.

1. Tap and hold on the screen

Just as the rest of the guide, the first step is really simple. All you need to do is find some empty room on your home screen and then tap and hold on the screen.

Upon doing so, you should see the classic screen where the apps are shaking and they're waiting for you to make the next decision.

Up next, click the "+" icon in the top-left corner of your screen. Not sure where is that? Simply look at the image above for reference.

2. Search for the Notion widget

You should then see a list with all of the apps on your phone that support widgets. Here you have two options:

In the image above, you can see how we chose to search for the Notion widget. Upon finding it, simply tap Notion.

You should now see a menu where you can select the type of Notion widget. Just like in most of the other apps, there are a few options, such as cards, boxes and so on.

For this tutorial, we chose to build the simple, boxy Notion widget, just like in the image above.

Once you've found the Notion.so widget that you want to add to your iPhone's home screen, simply tap on it.

This step mainly consist of selecting which Notion page you want to be visible on the home screen.

Once the widget was added on your home screen, you should see a blank square stating "Tap and hold to set up".

Doing as the widget says will get you to a screen like in the image above. The next button you want to press is "Edit Widget".

Lastly, here you have to customise the widget's page. Meaning? You now have to finally select the page that you want to be visible on your iPhone's home screen.

Once you've found the page you want to be shown in the preview, click on it, and then close the menu and you should see that in your home screen.

Does Notion have iPhone widgets?

Yes, Notion has iOS widgets that you can add to your iPhone or iPad. Notion's widgets work the same as any other Apple widget.

To add one of these, you first need have the Notion app installed in your device.

What iOS do I need to use Notion's widgets?

You can only use Notion's widgets if you have an iOS mobile device supporting iOS 14.0 or later. To add a widget, you also need to have the Notion app already downloaded in your device.

Was this guide helpful? For more other tutorials like this, feel free to browse our library of Notion tutorials. Thanks for stopping by!