Forms are all cool, and so is Notion. How about making forms in your favourite no-code tool? At Simple.ink, we have the recipe to building forms in Notion almost effortlessly. Follow along to see how you can make forms in Notion!
Oops! You weren't meant to see this.
Mind pressing the button, instead of the 'enter' key?
Oops! Something went wrong while submitting the form.
Try creating a form
No card required
No time limit 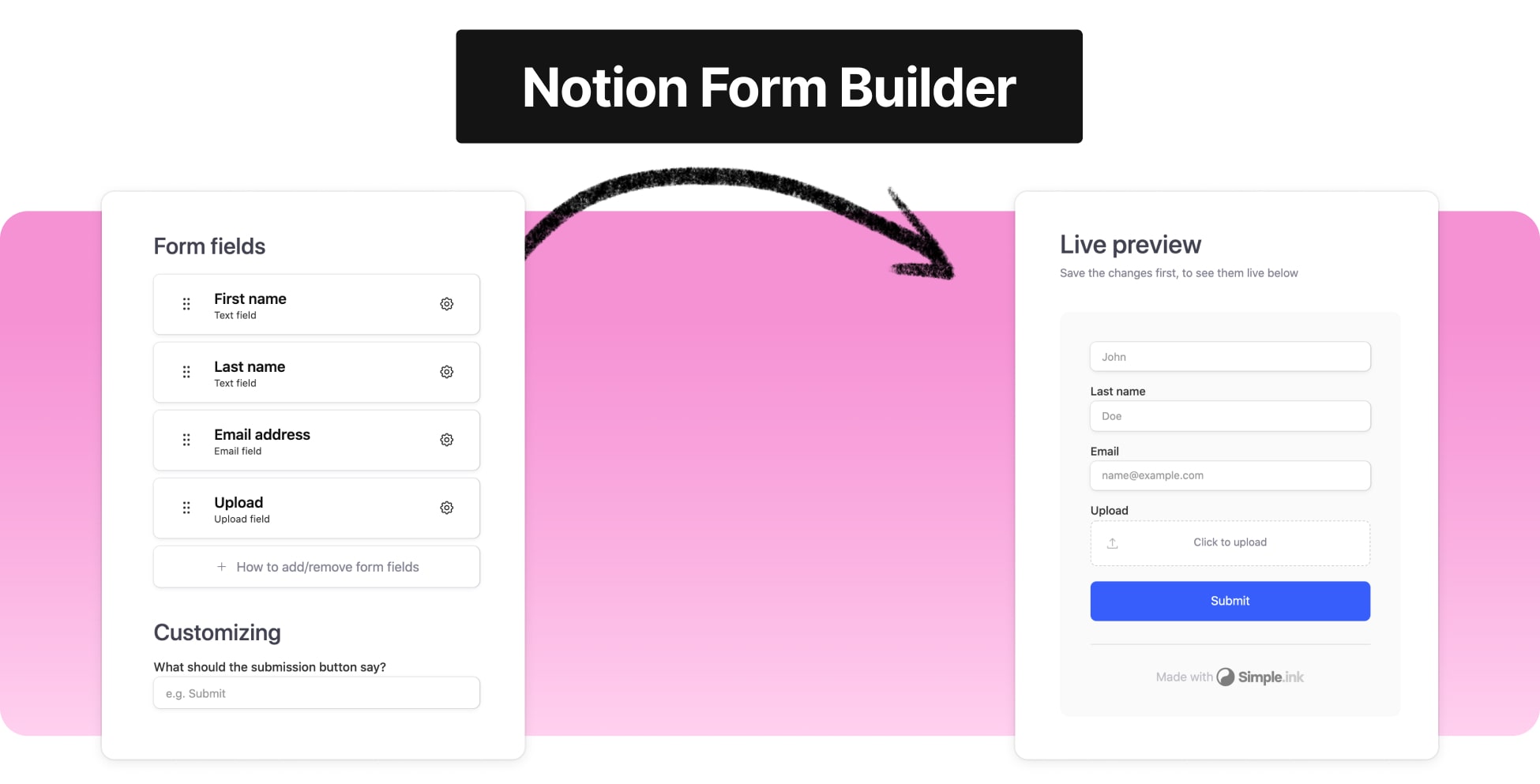 Intro
How to
Why?
Templates
Reviews
FAQ
Website examples
Why Simple.ink
TRY FOR FREE

Everybody starts on a free plan, and you can stick to it forever. It costs you nothing to try Simple.ink!
Oops! You weren't meant to see this.
Mind pressing the button, instead of the 'enter' key?
Oops! Something went wrong while submitting the form.
Try it for free
No credit card needed
Unlimited free version
Try creating a form
No card required
No time limit

Build with our Notion Forms, freely and easily

Notion is lot of people's favourite no-code tool, and at Simple.ink, we're doing our best to help you get every to-do done within Notion so that you wouldn't leave the app for stuff like forms, surveys or quizzes.

Speaking of which, with the power of Notion and Simple.ink, you can build lots of forms in Notion with almost no effort. The process also takes no more than just a few minutes.

The interface is really easy to use, and it's as clean as Notion's. Making an ugly form is pretty hard, so you don't either have to stress about the design of your Notion form.

Want to build a form? No worries, that should take no longer than just a minute. Setting up your account and forms is as easy as 1, 2, 3.

Our built in Notion forms are really easy to use. Moreover, they're functional, as your users won't encounter any bug while trying to submit their answers.

Not only that your forms are built in Notion, but you're also going to get the replies within Notion. No more 3rd party-app stress!

No need to code

Your Notion form building experience is 100% code-free. You don't need to know anything about coding to build forms in Notion, as we took care about all of that.

To build your own form in Notion, you have to follow three easy steps. Let's see them!

Make sure to connect your Notion account to Simple.ink's form builder.

This is the fun part. Customise your Notion form with the fields you want your users to see.

3. Go live with the form

Now that you've also added the fields to your form, you're ready to go live!

Why build a form in Notion?

If the idea of building forms in Notion sounds appealing but you still need some validation, then let us tell you the biggest advantages that you'll get by using our Notion form builder.

All of the Simple.ink-built forms in Notion look really minimalistic. We tried not to steal the look of Notion's clean design by making the forms the same clean. It's really hard to build an ugly form in Notion!

With Simple.ink's Notion form builder, as soon as you're building the form, you're having a view of what you're down. This way, you'll always see the live preview of the blocks that you're adding and removing within the form.

Guides to learn from

Not sure how to use the Notion form builder? Check our our library of guides to learn everything about Notion.

If you have any question about the Notion form builder, then contact us via live chat by clicking on the blue bubble in the bottom-right corner of each page.

First time? Learn how to duplicate a template for your website
We're working really hard to put out more templates, including some for this type of website.

In the meantime, why not have a look at the templates we've made so far? Click the button below to see them!
Want to see all our templates?

What they say about us

Simple ink is awesome. Glad to be one of the first customers! The demo is super compelling - just signed up! Augis Kaleinykas
Founder at Morflax, Developer & Designer
Looks beautifully simple and easy to use! This is right up my alleyway No items found.
Do I need to know how to code?
Not at all! Simple.ink takes care of everything so that you can build, upgrade and maintain your website without having to know how to code. It's faster, more effective and leaner than going for the manual route of setting up a website.

If you know how to code, you can make use of that, but it's not required.
Do I need a paid Notion plan to use Simple.ink?
Not at all! You can use the free plan of Notion and still use Simple.ink to its full potential.
What counts as a website?
One website will mean one domain and all its subpages. Whether that's a subdomain with us (e.g. you.simple.ink), or a custom domain of yours (e.g. you.com), that's one plan.

Got multiple custom domains? You'll need a paid plan for each one.
How do you compare to ______?
We have a generous free plan, so I (= Daniel, the founder) encourage you to make the comparison yourself! It costs you nothing - and no hard feelings if you don't want to go with us.

We would really love to know what made you go with us or somebody else! If you could take a moment to write us about that, it'd help us create a stronger product.
What if I have more questions?
Then we're standing by to help. Contact us, and we'll do our best to help 🤗 (use the live chat bubble in the lower right corner

Examples of websites built with Simple.ink 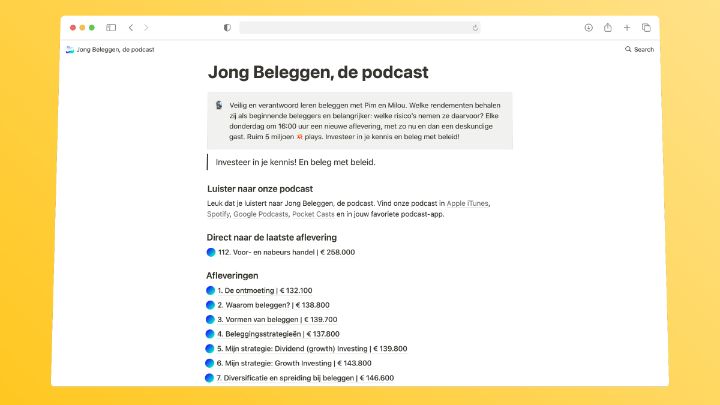 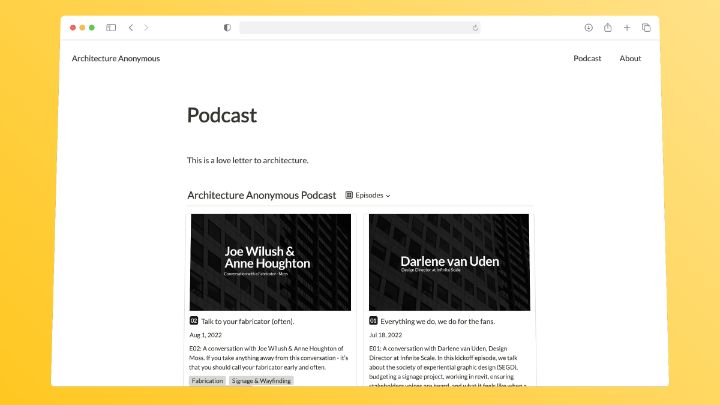 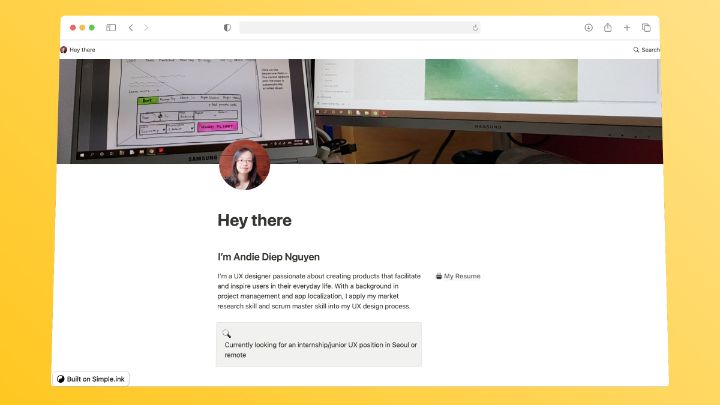 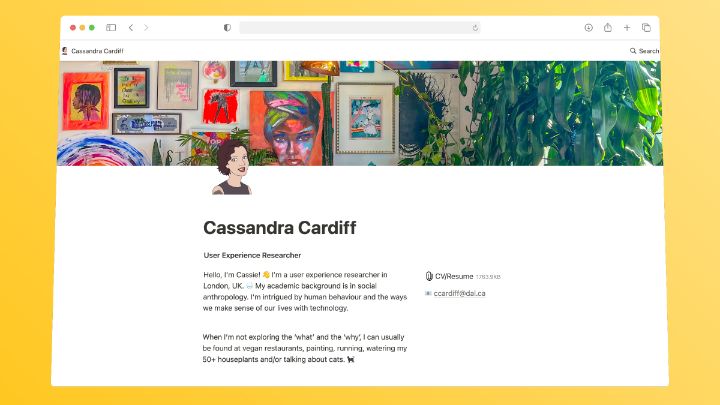 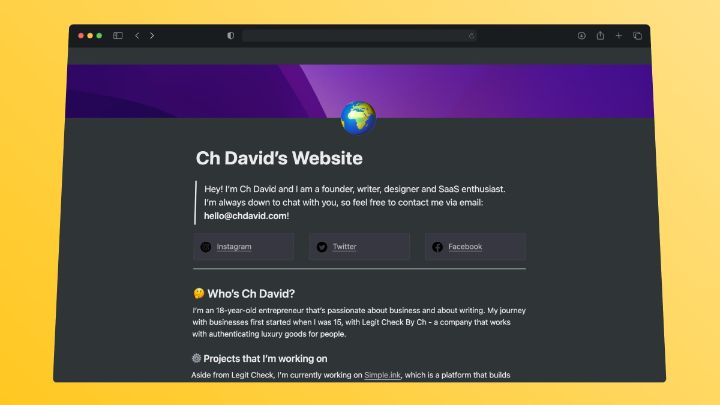 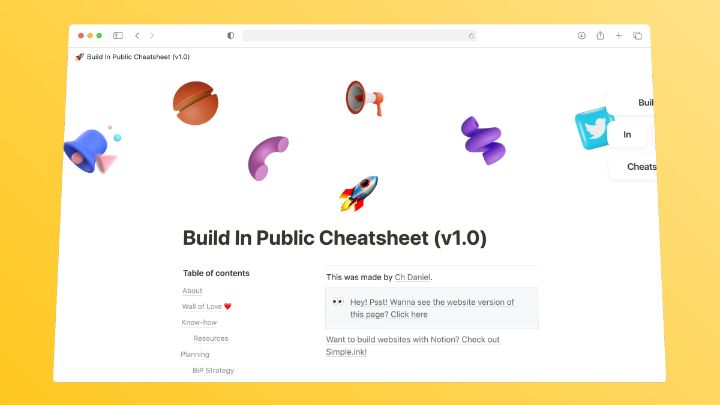 Free
Simple.ink is completely free to start. Just paste a link and start building your website!
Fast
Fast to use, fast to load. The Simple.ink experience will be snappy for you and your viewers.
SEO-Ready
We're taking care of setting your website up for SEO. See you on the first page(s)!
Optimized for 0 headache
Simple.ink was made to... well, simplify. We're working hard to simplify even more things for you.
No-code
The power of no-code is unleashed with Simple.ink. No coding skills required!
Powerful
Simple.ink works hard to help you build the website you want, when and where you want it

We're more than happy to let you know that we do lots of other things Notion. For instance, besides the Notion form builder, we're working with Notion websites and Notion templates.

Oops! You weren't meant to see this.
Mind pressing the button, instead of the 'enter' key?
Oops! Something went wrong while submitting the form.
Try it for free
No credit card needed
Unlimited free version
Try creating a form
No card required
No time limit