Home
/
Guides
/
How to embed forms in Notion

How to embed forms in Notion 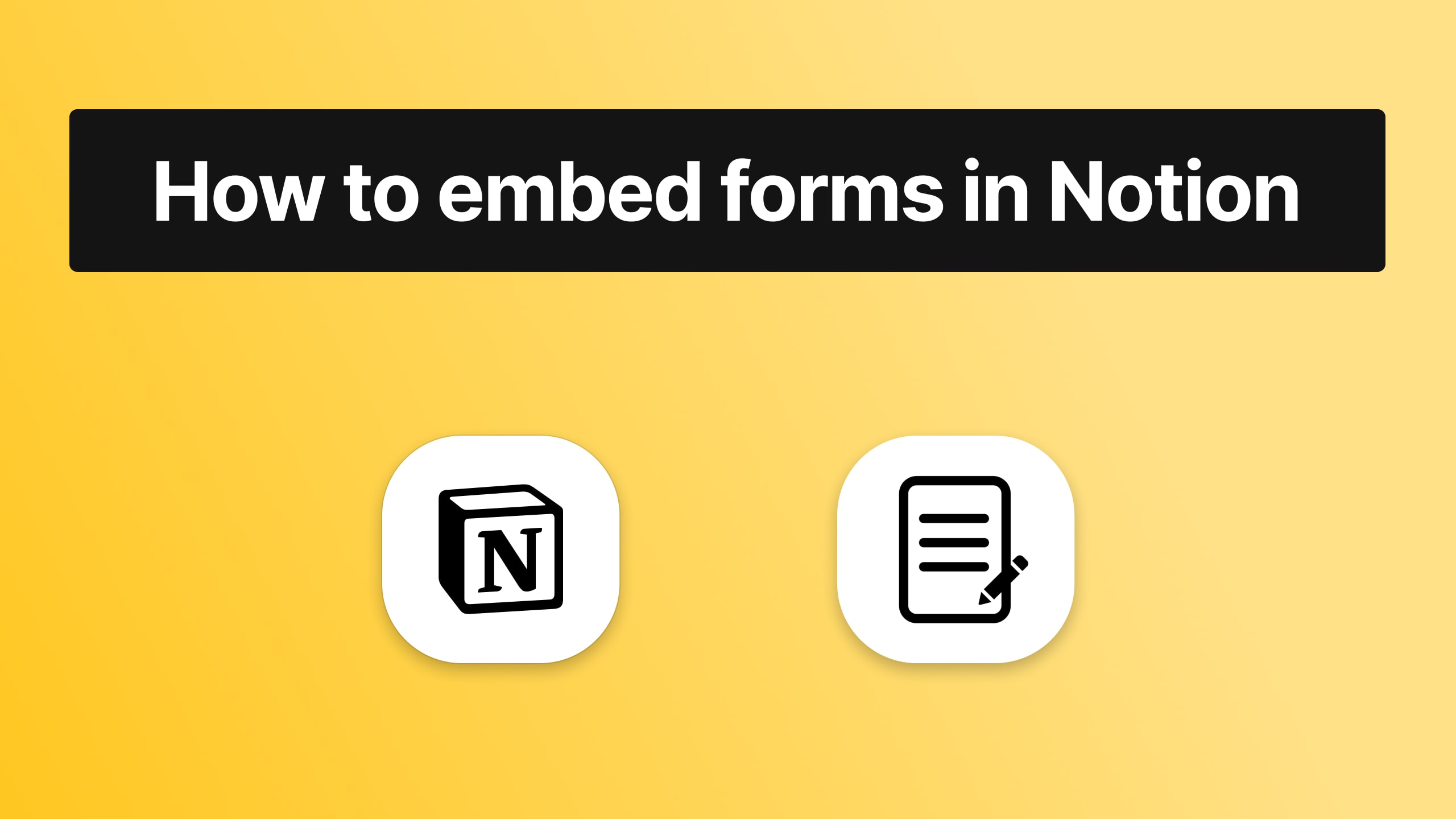 Forms are cool and Notion is lots of people's favourite no-code tool. You know what's great? Combining forms and Notion.

By reading this guide, you are going to get up to speed on embedding forms in Notion.

There are two ways to do this, so let's waste no time and see how to embed forms in Notion.

Psst, hey! If you want to build forms in Notion, check out the Simple Notion Form Builder.

Why embed forms to Notion?

Mainly because you'll gain lots of email addresses with your users not even leaving Notion. Basically, you'll gain a sort a base of users with ease.

Another way to put it: embedding forms in Notion is useful when you have a form/survey/etc that you want to be filled it by your users. This way, people won't need to get out of Notion in order to completed your survey.

Is coding required to embed in Notion?

No, and we're more than happy to say that. At Simple.ink, everything is code-free.

How embed forms in Notion

The process is really easy, and in fact, there are two ways to do this.

If you chose the first option, then here's what you have to do.

First things first, go to you form and copy its URL. For this example, we're using a mock-up Google Forms URL.

To paste a URL in Google Forms, here's what you have to do:

By the way, for Google forms, we have a separate guide which may be better for you: how to embed Google Forms in Notion.

Now that you have your form's link into the clipboard, paste it in your preferred Notion page.

As soon as you've pasted your link, you should see the "Create an embed" button.

Click that button in order to transform the link in to an embedded form. Once you've clicked that, you should perfectly see the form in Notion.

We're done with the first option, and the form is now visible and usable in Notion! How awesome is that?

If you want to choose this option, then follow along to see everything there is to know about embedding forms in Notion.

First of all, go to Notion and type "/embed" or just "/" and then scroll all the way down to the "Embed" section.

Now you have to go to your Google Form page and copy the URL of the form you want to see in Notion.

For this example, we're going to use the same Google Form URL that we've used at the first step in the first option on how to embed forms in Notion.

The link that we've just copied now has to be pasted in the Embed block.

Hey, did you see that? The weather is awesome... Why not add weather in Notion?

As soon as you've pasted the Google Form link in Notion, hit the "Embed link" button.

Now you have to wait just a few seconds for your form to embed in Notion, and then the job's done - you form will appear in notion.

Now your users can respond to your Google Form in Notion. How awesome is that?

Can you embed forms in Notion?

Yes, Notion allows you to embed all sorts of forms. All you have to do is make an Embed block, copy your form's link and then paste it in the Embed block.

Then, your users will be able to use the form within your page in Notion!

Another way to embed forms in Notion is just pasting your form's URL in Notion and select "Create an embed". Wait just a little bit, and then your form will be 100% usable within Notion.

Can you create forms in Notion?

While Notion doesn't have a "Form" block, you can use the Notion Form Builder that we offer. Tidy forms, all made 100% in Notion!

Therefore, we can safely assume that there is a way to easily make clean and working forms in Notion, even though Notion doesn't have a block to do so.

How do you make a form in Notion?

Within our Notion Forms tool, we teach you everything there is to know about forms. Simply build forms in Notion with just a few clicks.

You don't have to code to build forms in Notion. Moreover, it's really easy to make forms in Notion, as you can see the progress you're making side-by-side with your work, thanks to the 'live preview' function within the builder.

How can I add a form in Notion?

To add a form in Notion, you need to make an Embed block and paste the form’s URL.

That’s it! You’ve just added your form in Notion. As you’ve noticed, this was just a simply copy-paste job.