How do you create an embed in Notion? 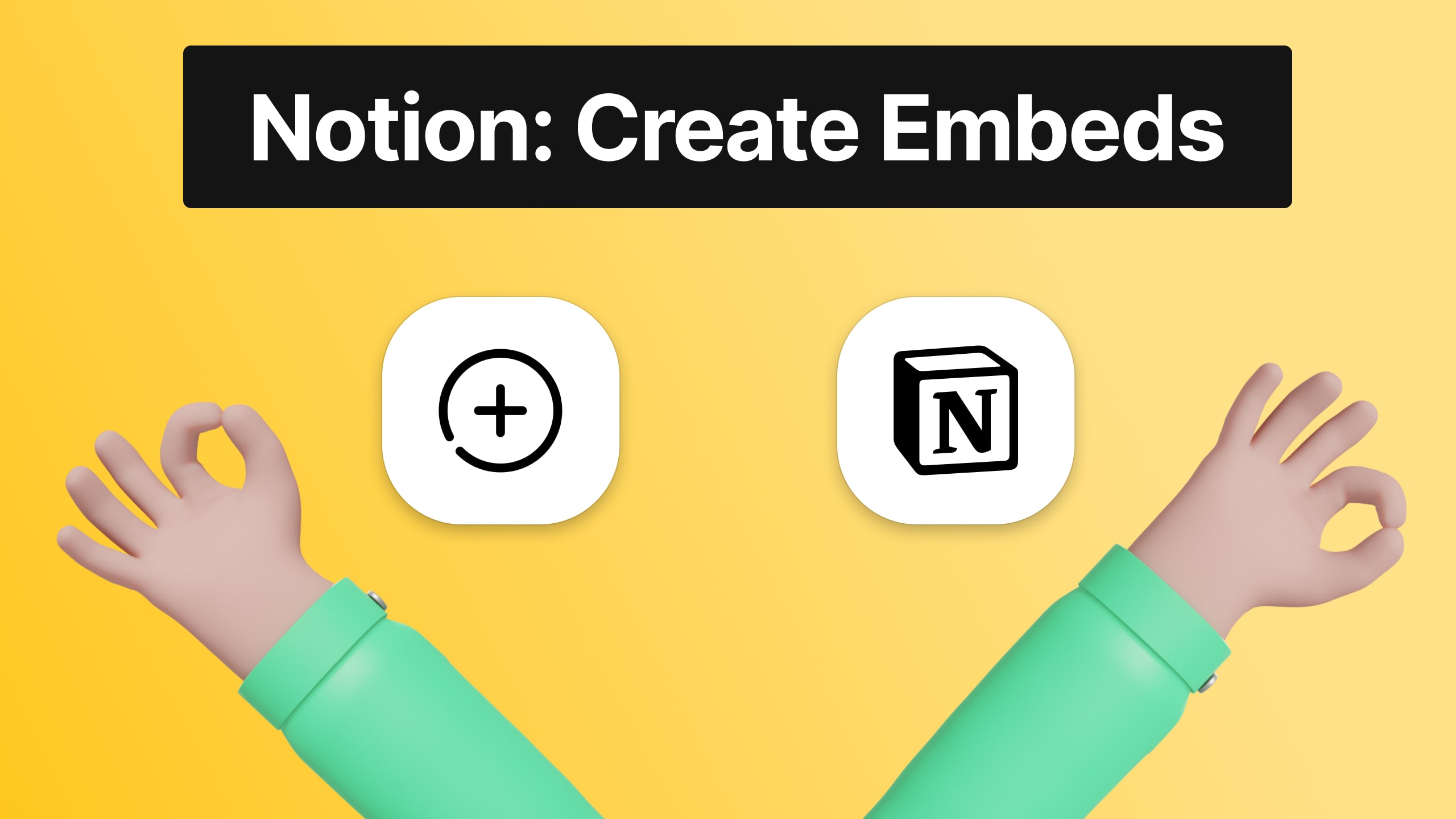 If you've used Notion and you wanted to add a link from a website or put a project snapshot or document/file preview right inside your Notion page, we know how you feel.

That's why we made this guide teaching you how to do this with all sorts of widgets, videos, images, GIFs, previews of links and so on.

You name it, we teach you how to embed it in Notion.

The purpose of this guide is to teach you how to create an embed for anything in Notion.

Why embed in Notion?

There are quite a few reasons why you should consider embedding in Notion.

For instance, if you are a crypto/stocks enthusiast, then you can embed a widget related to the current price of Bitcoin or of Tesla's shares.

Not really. To create an embed in Notion, you don't have to know anything at all about coding.

How to create an embed in Notion

The process to create an embed in Notion is really easy, so bear with us to see all you need to know about Notion embedding.

In case you didn't know, Notion actually allows you to embed lots of platforms. For the full list of platforms you can automatically embed in Notion, click on the highlighted text in order to go to Notion's official guide on embedding these apps.

Now, let's proceed to explaining how you can actually embed all of these apps that are tied with Notion.

As an example for this guide, we're going to embed a Loom recording.

So, the first thing you have to do is to copy a URL from one of those platforms that are connected with Notion that you want to embed in Notion.

In order todo so, type "/embed" or just type "/" and scroll all the way down to the "Embed" option.

As soon as you've written "/embed", you can see a list of options, just like in the image below.

If you want to:

For now, we're going to embed a link.

Now that we've created the "Embed" block, we just have to paste the link of our item and hit the "Embed link" button.

As previously said, we're taking Loom as an example, so we're going to paste our Loom link.

We now have a functional embed block in Notion. How awesome is that?

That was all great above, but what if what you want to embed in Notion isn't in the dropdown you see as soon as you type "/embed"?

The process is pretty much the same as at the first option, only now we're skipping the part where we have to choose from one of the platforms in the drop-down.

Worry not, we've got you covered even in this situation. Let's jump into it!

First things first, be sure to obtain the embeddable link of what you want to embed in Notion. Basically, look for the "Embed Link" function on the website that you're browsing.

As an example for this option on how to create an embed in Notion, we're going to embed the currently pinned post within the r/Saas subreddit.

As usual, in order to create an embed in Notion, we have to make an Embed block by typing "/embed" and to hit enter.

3. Paste a link/upload a file

In order to embed a link, we're just going to paste the one that we've just copied from Reddit.

Upon doing so, your link will just embed in Notion and this is what you'll see:

That's it! You've just witnessed the second way to create an embed inNotion.

This option to create an embed in Notion applies mostly to widgets.

Here are the steps you need to do.

Found a nice widget? Copy the embeddable code of that widget. If you haven't found a widget already, when you find the right one, be sure to copy its embeddable code.

As soon as you get that code go to HtmlSave. As this website's name may suggest, what it does is that it transforms your HTML code into a sharable link that you can later embed in Notion and appear as widget instead of a plain link.

You have to know that before we begin you have to register on the HtmlSave website and if you want a free plan, you'll have to disable your AdBlocker.

What you're seeing in the image above is the home page on HtmlSave. There you have to paste widget's embeddable code.

As soon as you're done, confirm that you're not a robot and hit "Submit to Save".

Make sure to copy that link because your widget is basically inside that link.

3. Embed the link in Notion

Now that we have the widget in our clipboard, we need to go to Notion and make sure to embed it there.

Let's make an "Embed" block with this link.

There are two ways of adding widgets in Notion:

Both option 1 and option 2 are really easy to use.

Paste your link in the Notion doc, hit "Create embed", and you'll get the widget.

Open the document and create an Embed block by simply typing "/embed".

We've done this before in this guide, so you've probably kept in mind how to do this by now.

Now that you've made the block, paste the widget's link there.

Below you can see what the widget will look like upon clicking the "Embed link" blue button.

That was it with the third option on how to create an embed in Notion. How easy was that?

The 3 ways to embed in Notion

Here are the possibilities you currently have to create an embed in Notion, summed up:

Can you create an embed in Notion?

Notion allows you to embed anything that's from over the Internet. You just have to make an embeddable link for your desired block and paste it in Notion.

We hope that this guide was useful. If you want to learn how to use Notion, then have a look at our Notion guides.

Besides guides, we're also doing much else in Notion. For instance, we also build Notion websites and templates. By the way, did you know what we are also building Notion Forms? Join the fun!